​For the Love of a Steampunk Heart:
​Firebend Chronicles, Book One 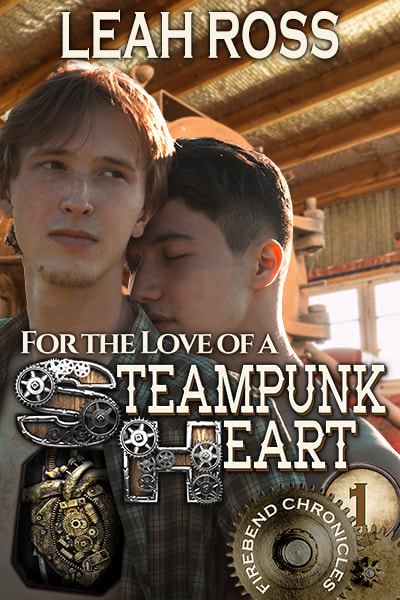 Sixty-four years ago, the Blast changed everything. The modern, interconnected world died and two disparate societies took its place. The pioneers founded their own world in the frontier of the Fringe. The rest crowded themselves into dome cities and cut themselves off from the world. Fringer or Domer. One or the other. Never both. Until now.

Nick Massey is an inventor and mechanic, a Domer struggling to break out of his poverty-stricken existence and escape his tragic past. He’s brilliant. He’s talented. He just lost his job. With nothing keeping him in the city, he leaves his meager life behind and strikes out for the wild unknowns of the Fringe. He’s hoping to find happiness and purpose. Instead, he finds Zander.

Zander Pennington is a Fringer, born and bred, a lifelong resident of the town of Firebend. He’s tough and resourceful and absolutely intolerant of unknowns. As a partner in the region’s most lucrative mineral mining operation, he doesn’t have time to deal with anything but business. Business is what he knows. Business is his comfort zone. Nick is not business.

Despite their inherent differences, Nick and Zander must learn to trust each other and work as a team to thwart the danger that threatens them and all of Firebend. It’s the danger they can’t fight, though, that could break both of their hearts and destroy their lives.